Gotta Serve Somebody: Bob Dylan in American Religion and Culture 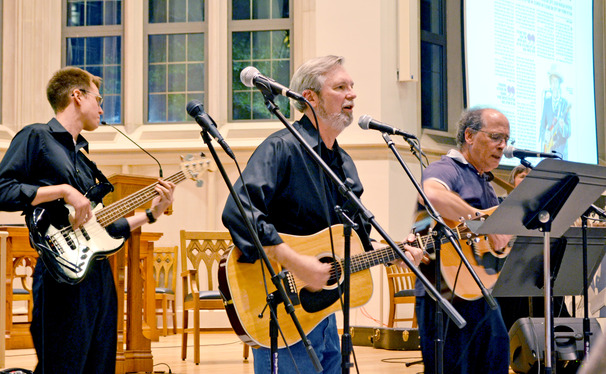 Faculty jam out to a repertoire of Bob Dylan songs at Goodson Chapel Thursday.

Gotta Serve Somebody—an event organized by Shalom Goldman, professor of religion and Middle Eastern studies, to celebrate the achievements of iconic singer-songwriter Bob Dylan—featured discussions of song lyrics and live performances of some of Dylan’s most popular songs.

The folk icon was chosen as the topic of the event as an opportunity to discuss the unique influences that inspired and resulted from Dylan’s career.

“We also wanted to talk about a great American songwriter, his influences from American culture and music, and how he influences them,” Goldman added. “We plan to touch on Bob Dylan’s influence on African-American churches as well.”

Dylan’s connection to African-American congregations was discussed as a critical element in his transition from folk to more religious music. Many religious fans were hesitant to accept Dylan's shift until he received endorsement from churches for his Christian-themed music, Goldman said.

Renditions of Dylan's most famous songs were performed by a band comprised exclusively of faculty at the Divinity School.

“I came to see my professor sing in the band,” said Kyle Carswell, a first-year divinity student.

The event began with a discussion of Robert Zimmerman, the Jewish boy from a quiet town in Minnesota who recreated himself to become folk legend Bob Dylan.

“Bob Dylan managed to completely obscure this without denying it,” Goldman said. “He never said, ‘I have nothing to do with this past,’ but he made his own past.”

Although the event primarily approached Dylan’s life and music through a religious lens—an apt perspective given the artist’s forays into born-again Christianity and Kabbalistic Judaism—Goldman also emphasized Dylan’s lifelong theme of building up a certain image and subsequently tearing it down.

“Another thing that makes him so intriguing is that he creates expectations and then seems to lead to disappointments,” Goldman said. “You end up irritated, yet drawn to him.”

Gotta Serve Somebody had a receptive audience of students, faculty of the divinity school and interested members of the community.

“I’m a big Bob Dylan fan, and I liked that it was Dylan and religion,” said Jan Dickey, a special events assistant at the Sarah P. Duke Gardens, who heard about the event from friends. “The Christian stuff tends to get overlooked a lot.

This article first appeared in The Chronicle.  To view the original, please click here.