LSD and the Rabbis: Part II 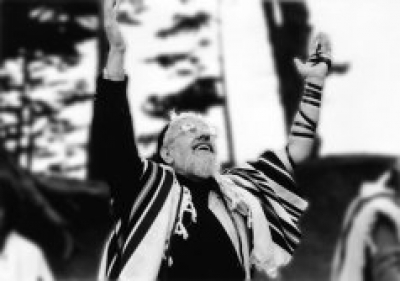 This article is a sequel to “LSD and the Rabbis.“

In utilizing intoxicants to heighten individual religious experience, Rabbi Zalman Schachter-Shalomi was influenced by the emerging zeitgeist of the early 1960s, a zeitgeist that the Esalen Institute of Big Sur, California, did much to develop and promote. In seminars led by luminaries like Aldous Huxley, Timothy Leary, and Humphrey Osmond, Esalen taught a generation of seekers about the theory and practice of “drug-induced mysticism.” In these seminars (though that may be too formal a word for the early Esalen classes) the teachers often made reference to ancient religious traditions that they believed had used chemically-induced states in religious ritual.

Through the influence of Esalen, the Soma of ancient India and the peyote of Native American tribes became models for modern experimenters in consciousness alteration. For most young American participants in the seminars, the connection between intoxication and spiritual power was a revolutionary notion. In the churches and synagogues of the day there was little of the mystical and even less of the intoxicating.

As mid-twentieth century American religions offered little in the realm of mystical experience, Asian religions became the reference point. In his book on Esalen, historian Jeffrey Kripal called this the “psychedelic turn to Asia.” Kripal noted that “there was no one-with the possible exception of Richard Alpert-who did more to turn the chemical mysticism of the Sixties ‘East’” than Timothy Leary.

And it was with Timothy Leary that Zalman Schachter took his first acid trip in 1962. This was not a rare distinction. Leary, in his quest to “turn on” America gave LSD to hundreds (and perhaps thousands) of people. But unlike most of his American counterparts who had rejected the blandness of institutional religion, Zalman Schachter came to the psychedelic experience from a religious background in which intoxication was valued. As a Lubavitcher, Hasid Schachter had been initiated into the Farbrengens, large gatherings in which listening to the Rebbe’s discourse, drinking schnapps, and singing ecstatically were the salient features. On the festival of Purim, a month before Passover, these Hasidim, unlike most Orthodox Jews, would follow to the letter of the law the Talmudic injunction that a person is obligated to get drunk on the holiday. So drunk, in fact, that one can’t tell the difference between Mordechai, the hero of the Purim story, and Haman, its villain. And Purim wasn’t the only Jewish holiday in which drinking was encouraged. On Simchat Torah, the “rejoicing of the Torah” holiday, Lubavitcher Hasidim are known to imbibe heavily.

But these ritualized intoxications, as enjoyable as they might have been for some of their Hasidic practitioners, were of a different order than the intoxications described – and invoked – at the Esalen seminars. There was no Jewish claim that getting drunk on Purim would lead you to a mystical experience of the divine. But imbibing with the Hasidim did provide a cultural context that would help Schachter make sense of his new experiences and explain them to others.

The setting of Schachter’s first LSD trip was the Ananda Ashram in Millbrook, New York, where Leary was administering LSD in a controlled and supportive environment. Fifteen minutes into the process, when the LSD began to take effect – Schachter no stranger to religiously – sanctioned  intoxication, turned to Timothy Leary and said: “This is better than Schnapps.”

That LSD trip and the others that followed were so much better than Schnapps that it led to Schachter’s break with the Lubavitcher Hasidim, a break that he would never completely make his peace with.

In Part One of this article, I quoted Schachter’s observation that “When you are in the Orthodox world, you see everything through their frame. But psychedelics had removed that frame. I could take on many points of view, appreciate many different religions and ways of dealing with consciousness.”

After LSD, Schachter’s Orthodox Jewish “frame” of religious experience was shaken but not shattered. And throughout his long and creative life, he presented himself as a teacher rooted in the Hasidic tradition, a Rebbe, though one with a New Age flavor.

Rabbi Menachem Mendel Schneerson, the last Lubavitcher Rebbe, at Lag BaOmer parade. Brooklyn, NY, on May 17, 1987. By Mordecai baron; cropped by “Beyond My Ken” via Wikipedia

In the retrospective glow of old age Schachter tried to present his LSD experiences as sanctioned by the leader of Habad-Lubavitch, the very movement he left. In 2005, at the age of eighty, he told an Israeli interviewer that in 1962, “the Lubavitcher Rebbe gave me a bracha (blessing) before I did LSD.”

But when challenged by the reporter about this unlikely assertion Schachter modified his claim. Haaretz reported Schachter’s retelling in this way:

“Rabbi Menachem Mendel Schneerson made a point of plying Zalman with tall tumblers of vodka, and blessing him so that he would have ‘a successful retreat’ and ‘a successful meditation.’ In retrospect, Zalman believes that the Rebbe was presciently blessing his upcoming LSD trip. Zalman later asked the Rebbe if he would be interested in taking LSD himself, but Rabbi Schneerson politely declined.”

Just as Timothy Leary felt the need to “turn on” the American cultural and economic elites, Schachter felt the need to “turn on” other Jewish religious figures – and here he again turned to the Habad-Lubavitch movement. His friend, and one-time fellow Habad emissary Shlomo Carlebach, was also open to the idea of ingesting something a little better than Schnapps. And in in 1964, two years after tripping with Leary, the two rabbis tripped together, but not an Ashram. Like Leary (who at his best tried to provide a safe and familiar setting for LSD ingestion) Schachter made his friend comfortable by choosing to take LSD in a synagogue.?

?In one of his many reflections on his psychedelic experience Schachter wrote:

“It was clear that what I’d experienced in prayer and meditation before—the oneness and connection with God—was true, but it wasn’t just Jewish. It transcended borders. I was sitting in a Hindu Ashram with Tim Leary, who was Irish Catholic, and I realized that all forms of religion are masks that the divine wears to communicate with us… But no single point of view alone is right.”

The texts of traditional Judaism, like the texts of its sister monotheisms Islam and Christianity, insists otherwise. In each tradition, there is a single valid point of view; all others views are by definition false and therefore dangerous. Zalman Schachter, with his profound knowledge of the Jewish textual tradition knew this well. But he choose to reinterpret the tradition to allow enable a Jewish perennial philosophy to develop and flourish.