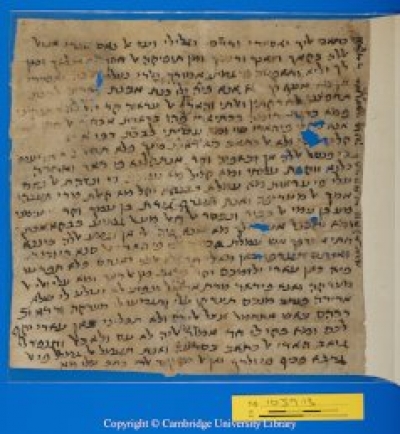 Readers of Goitein’s 3rd volume of Med. Soc. on ‘The Family’ may remember T-S 10J9.13, a “cry for help uttered by the luckless woman” with which Goitein concluded his discussion of marital strife “caused or aggravated by the interference of the husband’s family.” The story behind the letter stands out both for its intricate web of kinship ties, as well as in the extent of familial strife that it conveys. Goitein translated the greater part of the letter and offered a convincing reconstruction of the kinship relationships (although some problems linger).[1] At the heart of the story are two (estranged) sisters who married two brothers who were also their paternal cousins. The letter was written by Umm Sitt al-N?s, the daughter of one sister, who was married to the son of the other sister. The couple moved in together with the husband’s family which quickly brought about trouble. According to Umm Sitt al-N?s, her mother-in-law isolated her from other people. From the letter it appears that the writer’s mother (one of the two sisters) had gained a bad reputation, a fact that the writer’s mother-in-law did not fail to utilize against her daughter-in-law. Umm Sitt al-N?s writes that “The least she did was that she said to me: 'Go away and become like your notorious mother'.” To top that, she reports that “You know the noble character of your paternal cousin (i.e. her father-in-law). He suspected me with my older paternal cousin!”[2] Umm Sitt al-N?s wrote the letter to Ab? l-Fa?l (Mevorakh b. Abraham) Ben Sabra, a well-known Maghrebi merchant, who Goitein suggests was her uncle and the brother of the two sisters. She informs him that she left home (“not of my choice”) and is living with a widow. She asks for a cape, a mantle and 20 dirhams so she can come to Ab? l-Fa?l who is “charitable to strangers, how much more to your child.” Following Goitein’s discussion and translation, this fascinating letter has been discussed and analyzed in the literature on women in the Geniza.[3]

Recently, I came across CUL Or. 1080 3.46, a faded and slightly torn letter written by the same woman and on the same matter to Ab? ?Umar Ben Sabra, who she calls “my brother.” However, from another Geniza document we learn that Mevorakh b. Abraham had two sons, one of them called Ab? ?Umar, and therefore it seems that this letter was written to the son of the recipient of T-S 10J9.13.[4] This, in fact, explains the use of the 2nd person plural in T-S 10J9.13: “you (pl.) know that I have no one but God and you, so do not neglect me, for my disgrace obligates you.” The existence of the two letters, dealing with the same matter, containing several related passages and, in fact, written even on pieces of paper of the same size allows us to look at how a single writer presents the same request to two different yet closely related people (the cape, mantle and 20 dirhams also make an appearance in this second letter). While the state of CUL Or. 1080 3.46 means that much time and work would be required to decipher and understand it in a satisfactory manner, the potential reward of such effort can be demonstrated through a single detail. In T-S 10J9.13, Umm Sitt al-N?s writes that “Even were I a daughter of a slave girl, you would protect me for my mother’s sake (lit. for the two eyes of my mother).”[5] In the letter to Ab? ?Umar she asks him to “protect me for the (tie of) blood and milk that is between us.” This statement practically proves Goitein’s suggestion that Ab? l-Fa?l (the father of Ab? ?Umar) was related by blood to Umm Sitt al-N?s. More importantly, it shows us that Umm Sitt al-N?s felt she had a claim over Ab? ?Umar not only because of blood kinship, but also because they were breastfed by the same woman. Islamic law and Arab culture recognize a special bond between infants who were breastfed by the same woman.[6] This bond creates a legal impediment to marriage, allows social interaction across gender lines and imparts a social obligation. As far as I am aware, this is the first indication that such a notion was shared by the Jews who left us their records in the Geniza.[7]

Research for this piece was supported by the Duke Center for Jewish Studies.

[2] [itta]haman? ma?a bin ?amm? al-kab?r - the nature of the suspicion is not explained in the letter. It is possible that this older cousin was an older brother of her husband or that he was Ab? ?Umar to whom the letter mentioned below was addressed.

[7] The Geniza is quite reticent regarding wet nurses; see Goitein, Med. Soc. 1:127. For the opposite situation in Ashkenaz, see Simcha Emanuel, “The Christian Wet Nurse during the Middle Ages: Halakhah and History” (Heb.) Zion 73 (2008), 21-40. While in this letter the milk relationship appears as imparting a social obligation rather than an impediment to divorce, one may speculate whether this milk relationship may have prevented Umm Sitt al-N?s and Ab? ?Umar (who were obviously quite close) from marrying, thus leading Umm Sitt al-N?s to marry another cousin, a marriage which soon soured. Finally, according to the Karaite Benjamin al-Nah?wand?, milk relationship is an impediment to marriage, which raises the question whether our couple may have been Karaites. However, the Ben Sabra family is known from over forty documents, none of which suggest they were Karaites. Furthermore, Karaite family law forbids the marriage of two sisters to two brothers, as was the case between this couple’s parents; see Judith Olszowy-Schlanger, “Early Karaite Family Law,” in Karaite Judaism: A Guide to its History and Literary Sources, ed. Meira Polliack (Leiden: Brill, 2003), 280-82.