A small, seemingly unremarkable burned parchment fragment found 45 years ago during excavations on the western shore of the Dead Sea has emerged after hi-tech sequencing as part of the Book of Leviticus from a 1,500-year-old Torah scroll. USA TODAY 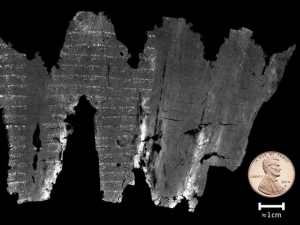 For decades, an object much like a burnt stick sat in storage in Israel, awaiting the day when its secrets could be divined. Now researchers have revealed that the blackened object is the one of the oldest known copies of a text fundamental to both Jews and Christians.

Hidden within the charred manuscript are verses from the sacred text called the Five Books of Moses. Also known collectively as the Torah, they are the foundation of Judaism and also integral to Christianity’s Old Testament. To scholars’ astonishment, the newly divulged text is exactly the same, in both letters and format, as text in modern Torah scrolls read by most Jews now.

The burnt manuscript dates to the 3rd or 4th century, according to chemical dating. The only older known Torah passages are found in the famed Dead Sea Scrolls. They date from the 2nd century and earlier and deviate slightly from the version of the Torah read today, indicating they were written before the Torah was completely standardized. 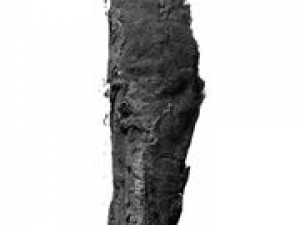 The scroll from En-Gedi. The seemingly unremarkable burned parchment fragment found 45 years ago during excavations on the western shore of the Dead Sea has emerged after hi-tech sequencing as part of the Book of Leviticus from a 1,500-year-old Torah scroll. (Photo: B. Seales)

Researchers considered analysis of the charred scroll “a shot in the dark,” Pnina Shor of the Israel Antiquities Authority said at a news conference. “And so when this came back as a …  flattened piece of material (that) looked like a scroll, you can’t imagine the joy in the lab.” Shor and her colleagues report their findings in a study published Wednesday in Science Advances.

The scroll was discovered in 1970 in a Jewish village called En-Gedi, which was destroyed by fire around 600. Inside the community’s synagogue, archaeologists discovered a Holy Ark, the cabinet where Torahs are stored. The En-Gedi ark held charred debris that had once been sacred scrolls.

One of those chunks of debris, now known as the En-Gedi scroll, was given a high-resolution version of a CT scan. Researchers created a digital 3D model of the scroll and looked on every surface for bright spots indicating inked letters. The images were digitally flattened and then pieced together, unveiling the text of five complete wraps of the scroll.

“Sometimes you can absolutely pull a text back from the brink of loss,” said Brent Seales of the University of Kentucky, another author of the new study.

The text, from the first and second chapters of Leviticus, includes 20 verses in all, says study co-author Michael Segal of Israel’s Hebrew University of Jerusalem. The verses describe the proper procedure for making sacrifices, reading in part, “The Lord summoned Moses and spoke to him from the tent of meeting, saying: Speak to the people of Israel.”

The En-Gedi scroll is the oldest known Torah text to be found in an ark, the study’s authors say. 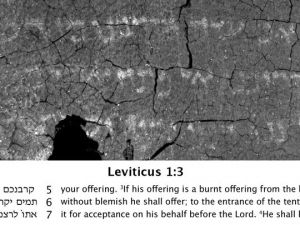 Partial transcription and translation of recovered text. Lines 5 to 7 from the En-Gedi scroll. (Photo: B. Seales)

The researchers’ method for peering inside the scroll should be useful for other old texts as well, such as the many fragile old manuscripts in the Vatican Library, says Vito Mocella of Italy’s National Research Council, who was not involved with the study.

“Finding a Biblical text from this particular period is very, very rare,” says Marc Brettler of Duke University says. Though the scroll “offers good and welcome confirmation” that the text of the Hebrew Bible “stabilized” by the 3rd or 4th century, it doesn’t significantly change scholars’ understanding of the text’s development, he added.

The study’s authors say they hope to see more of the verses from the scroll. But what they have so far are “just like modern paragraphs,” study co-author Emanuel Tov of the Hebrew University of Jerusalem said. “This is quite amazing for us, that in 2,000 years, this text has not changed.”