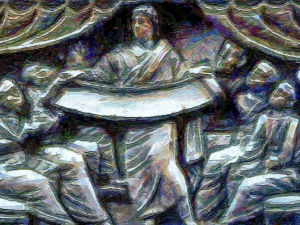 This article originally appeared as a guest post on "The Bart Ehrman Blog: The History & Literature of Early Christianity."  September 23, 2021   An important book on understanding the Bible recently appeared: The Bible With and Without Jesus: How Jews and Christian Read the Same Stories Differently, by Marc Zvi Brettler and Amy-Jill Levine.  I have asked both authors to provide a guest post or two, and here is the first.  Marc Brettler has long been a prominent scholar of ancient… read more about Christian Stereotypes of “the God of the Old Testament.” Marcion is Alive and Well and Well and What To Do About It. » 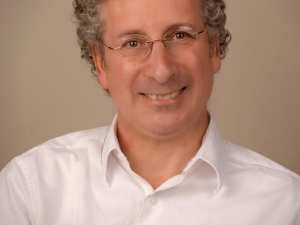 Marc Zvi Brettler: Christian Stereotypes of “the God of the Old Testament.”

read more about Marc Zvi Brettler: Christian Stereotypes of “the God of the Old Testament.” » 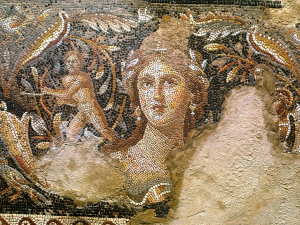 Please apply at: https://academicjobsonline.org/ajo/jobs/19569  The Perilman Post-Doctoral Fellowship provides a stipend of $55,000 per year, as well as benefits, for one full year, with a second year possible renewal. The Fellow will be expected to be in residence, to conduct research in Duke's library and archival collections, to participate actively in the intellectual life of the university, to teach three semester courses over two years, and to give a public lecture on their research. The Fellow may not undertake any… read more about 2022-23 Perilman Post-Doctoral Fellowship » 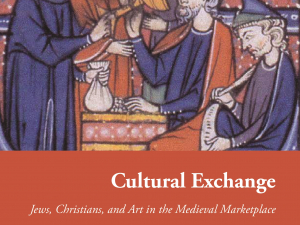 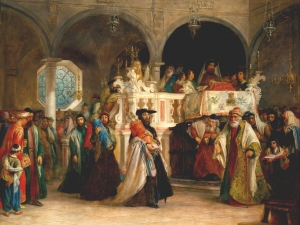 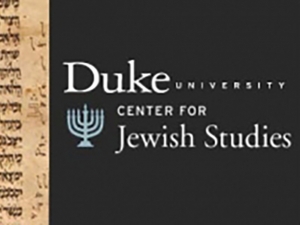 Statement of Solidarity Against Anti-Asian Violence

Statement of Solidarity Against Anti-Asian Violence We are stunned by the anti-Asian mass shootings in Atlanta on March 16, 2021. Our hearts go out to the victims and their families who have suffered from this senseless act. This is not an isolated incident and comes out of the current-day repetition of long-standing racist sentiments targeting various minority communities fueled by political rhetoric. Since March 2020, the former U.S. president and his allies have relentlessly scapegoated people of Asian… read more about Statement of Solidarity Against Anti-Asian Violence » 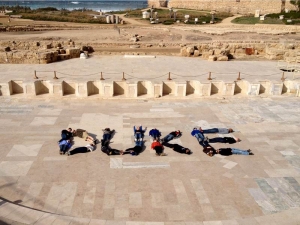 The Ostad Fellowship in Jewish Studies 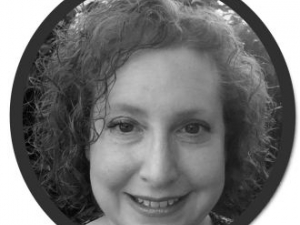 As part of its event series tgiFHI, the Franklin Humanities Institute is conducting interviews with its faculty speakers in order to familiarize broader audiences with the diversity of research approaches in the humanities, arts, and interpretive social sciences at Duke University. Dr. Laura Lieber is Professor of Religious Studies, Classical Studies, German Studies, and Divinity, and director of the Duke Center for Jewish Studies. In this edited and condensed interview, she describes why she's interested in the texts… read more about Meet Your Humanities Faculty: Laura Lieber » 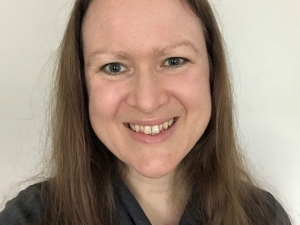 We are delighted to welcome Sarah Baker to the Hebrew Language program in Asian and Middle Eastern Studies.  Professor Baker has a Ph.D. in Middle Eastern Languages and Cultures (with a specialty in Hebrew Bible/Ancient Near East) from the University of Texas at Austin, where she taught both Biblical and Modern Hebrew for several years and received the student-nominated Foreign Language Teaching Excellence Award. She has developed a variety of innovative Biblical Hebrew curricula (in-person and online) for… read more about Sarah Baker joins the Hebrew Language Program! » 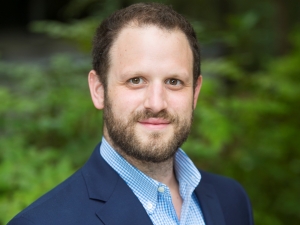 Eli Sperling joins the Center as the AMES Post-Doc

After receiving his BA in Middle East studies and political economy in 2006 from Evergreen in Olympia, WA, Eli Sperling pursued an MA in contemporary Middle Eastern history at Tel Aviv University (2010). He has traveled and conducted research extensively throughout the Middle East, spending significant periods of time in Israel, Cairo and the Sinai Peninsula and received his PhD from Ben-Gurion University of the Negev in September 2019. From 2012-2020, Eli served as the Senior Academic Research Coordinator at Emory… read more about Eli Sperling joins the Center as the AMES Post-Doc » 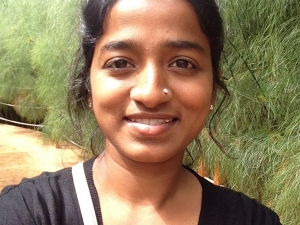 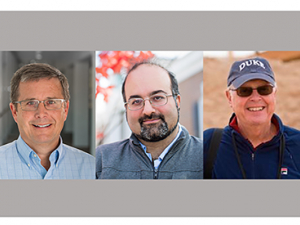 Last week’s killing of top Iranian commander Qasem Soleimani has raised a number of legal and strategic questions for which there seem to be no consensus, including among Duke faculty. Charles J. Dunlap Jr., a professor of the practice of law and executive director of the law school’s Center on Law, Ethics and National Security, said President Donald Trump’s directive to kill Soleimani was “lawful self-defense” as authorized by the United Nations Charter, not an unlawful assassination. “Because Soleimani was engaged in… read more about Killing of Iranian Commander Raises Legal, Strategic Questions » 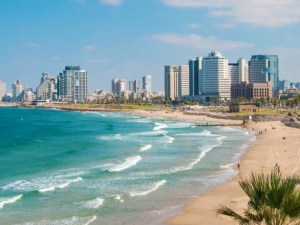 Shore Undergraduate Research Fellows, Andrew Carlins (’21) and Grant Besner (’19), have created an exciting project focusing on podcasts that share untold stories in Israel.  Their website, Is(That)Raeli? explores Israeli culture through these voices.  Besner and Carlins spent 10 weeks interviewing Israelis from all walks of life, from an Eritrean asylum seeker to the American-Israeli former spokesperson for the Israeli Defense Forces, painting a much more nuanced, much more human portrait of a place for… read more about Shore Scholars Give Voice to Untold Israeli Stories » 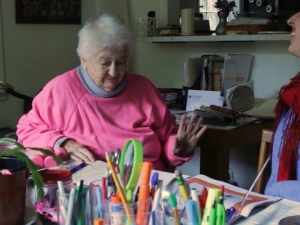 Tamar Rachkovsky, Perilman Fellow at the Duke Center for Jewish Studies, screens her documentary "Home in E Major" in it's world premier at the Edinburg International Film Festival, Sunday, June 23, 2019. Observing the everyday routines and dramatic upheavals of a cross-generational and multicultural shared house, Rachkovsky turns a story about her own move from Jerusalem to Durham, North Carolina, into a powerful and moving reflection on emotional bonds, mutual care, ageing and death. As the connection between the young… read more about Tamar Rachkovsky to screen "Home in E Major" at Edinburgh Film Fest » 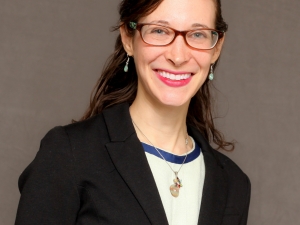 The Duke Center for Jewish Studies is delighted to announce the appointment of Dr. Grace Kessler Overbeke as our Perilman Postdoctoral Fellow for 2019-20. Dr. Overbeke works at the intersection of Jewish Studies and Theatre Studies.  She recently completed her dissertation on the life and work of Jean Carroll, the first Jewish female stand-up comedian—“the real Mrs. Maisel.”  This project developed out of her interests in female Jewish comedians and autobiographical performance among marginalized… read more about Duke Center for Jewish Studies welcomes Grace Overbeke  » 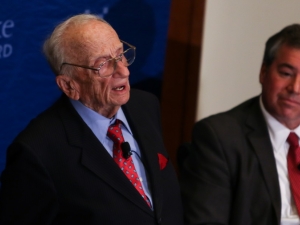 "Ben Ferencz, the last living prosecutor from the Nuremberg trials, advocated for 'law, not war' to a crowd of several hundred packed into Sanford Fleishman Commons and other adjoining rooms Wednesday.  "At 27 years old, Ferencz became the chief prosecutor for the U.S. Army at the Einsatzgruppen trial—his first case—which tried 22 defendants for the murder of more than a million people. Deemed 'the biggest murder trial in history' by the Associated Press, the trial resulted in the conviction of all the defendants. More… read more about Ben Ferencz, Last Living Nuremburg Prosecutor, Comes to Duke » 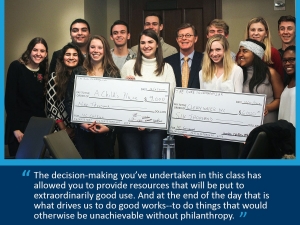 See full article at Duke Chronicle.  "Students in the first-year seminar, named Values in Action, partnered with the Philanthropy Lab, a national philanthropic organization, to present a combined $101,000 in grant funding to a variety of organizations Monday. President Vincent Price, speaking before the students at the presentation, said that he believes philanthropy is ingrained into the culture at the school.   “Virtually everything that is done at this University day in and day out—every course like this we… read more about Jewish Studies Students distribute $101,000 in grants for Philanthropy Lab » 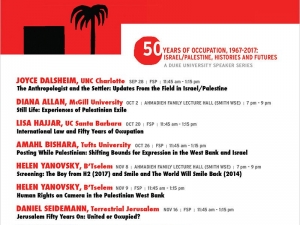 Over the course of the fall semester, seven scholars on Israel/Palestine spoke at Duke in a lecture series entitled "50 Years of Occupation, 1967-2017: Israel/Palestine, Histories and Futures."  The speaker series included Amahl Bishara, who spoke about the use of the internet and social media in the West Bank, Joyce Dalsheim, who lectured on the anthropology of settlers in Hebron, and Lisa Hajjar, who discussed international law and the Occupation. Helen Yanovsky of the Israeli NGO B'tselem spoke about the… read more about As Trump Declares Embassy Move, Scholars Discuss Future of Jerusalem at Duke » 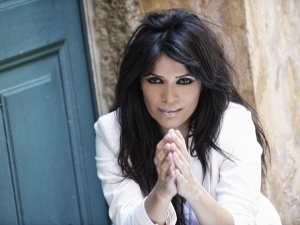 Yasmin Levy is an acclaimed Israeli artist known for her twist on Sephardic songs. The musical tradition came from her father who recorded and preserved folk songs in Ladino, a Judeo-Spanish language that emerged in the territories of the ancient Ottoman Empire after Jews were exiled from Spain in 1492. Today Levy performs these traditional songs and infuses them with flamenco and her signature doses of passion and melancholy. She speaks with host Frank Stasio about the pushback she has received for promoting and… read more about Yasmin Levy Pours Passion Into Sephardic Songs  » 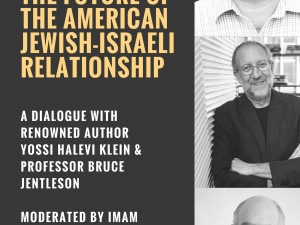 Prizewinning Israeli author Yossi Klein Halevi will discuss the future relationship between American Jews and Israel, Wednesday, Nov. 8, at Duke University. The talk begins at 6 p.m. in the David M. Rubenstein Rare Book and Manuscript Library on West Campus, and is free and open to the public. Parking is available in the Bryan Center garage and lot. Imam Abdullah Antepli, chief representative of Muslim affairs at Duke, will moderate the discussion with Halevi and Bruce Jentleson, a professor of political science and… read more about Yossi Klein Halevi comes to Duke! »

This article originally appeared at the following: http://kenan.ethics.duke.edu/blog/jewish-muslim-religious-leaders-share-importance-inter-faith-dialogue/  March 28, 2017 Imam Abdullah Antepli , left, shares a laugh with Rabbi Lord Jonathan Sacks during the pair’s public talk, “Civility & Difference.” In front of a crowd filled with Duke and Durham community members of a variety of faiths, two religious leaders urged about 200 people March 27 to see humanity as the overriding feature that can unite… read more about Rabbi Jonathan Sacks Visits Duke, and the Center for Jewish Studies »

This article can originally be found at: http://www.valuesandvoices.com/letter14/ February 2, 2017   Dear President Trump, Vice President Pence, Members of the Trump Administration and 115th Congress, The story about Abraham bargaining with God to save the people of Sodom is well known; but the underpinning of this story is rarely recognized. After admonishing God, “Shall not the judge of all the earth deal justly?” (Genesis 18:25), Abraham does not suggest that God save only the righteous… read more about Marc Brettler on American Values, Religious Voices » 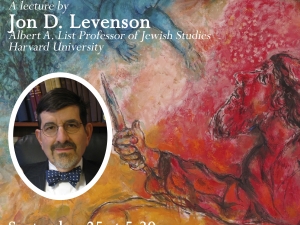 Jon D. Levenson lecture "Genesis 22: The Binding of Isaac and the Crucifixion of Jesus" now ONLINE

Original article appeared at: http://www.usatoday.com/story/news/2016/09/21/burnt-manuscript-one-oldest-known-copies-torah-ever-found/90786164/ Charred manuscript is one of oldest known copies of Torah ever found Traci Watson, Special for USA TODAY 2:24 p.m. EDT September 21, 2016     A small, seemingly unremarkable burned parchment fragment found 45 years ago during excavations on the western shore of the Dead Sea has emerged after hi-tech sequencing… read more about Marc Brettler talks with USA Today about the Ein Gedi Torah scroll » 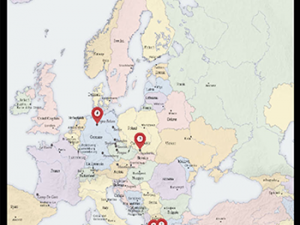 This article originally appeared at: https://global.duke.edu/student-designed-app-preserves-holocaust-survivor-stories An idea born in one Duke classroom now has the potential to be a tool in many. A team of first-year students in Professor Laura Lieber’s seminar on Jewish-German culture dreamt up a way to use 21st century technology to preserve the stories of Holocaust survivors. Since finishing Lieber’s course this spring, team leaders Scott Powell and Matthew Kirshner have raised funds to make the idea a… read more about Student-Designed App Preserves Holocaust Survivor Stories »

excerpt from AJS Perspectives: http://perspectives.ajsnet.org/sound-issue/sound-editors/ "...With this issue of AJS Perspectives, we seek to highlight a few of the myriad roles that sound, and the study of sound, can play within the world of Jewish Studies. Some authors approach sound through a textual lens: the sound of poetry. Others attend to "intentional" sounds, notably music: its composition, performance, and implicit (and explicit) complexities. Other authors, however, draw our attention to ambient… read more about New AJS Perspectives Now Online » 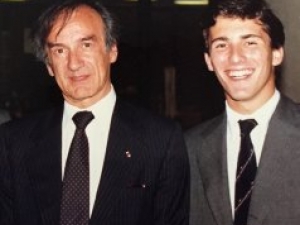 Duke graduate (Trinity '88, School of Medicine '93), Bobby Green, remembers his time at Duke. While completing his Certificate in Jewish Studies, Green had the opportunity to meet and introduce the late renowned Elie Wiesel, who gave the Rudnick lecture in 1987 in Page Auditorium. Green recently posted this photo of him and Wiesel on Facebook, with a thank you to Professor Emeritus Eric Meyers for giving him such a great opportunity. The David M. Rubenstein Rare Book & Manuscript Library currently has both audio and… read more about Bobby Green Remembers Wiesel's Talk at Duke Jewish Studies » 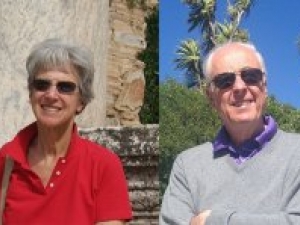 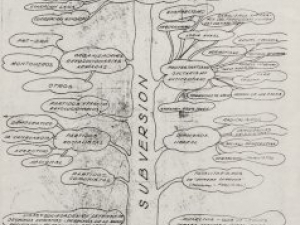 Today, March 24, 2016, marks the fortieth anniversary of the Argentine military coup that ushered in one of the Western Hemisphere’s most repressive regimes. Seeking to quash “subversion” and liberalize the economy, the coalition of military and civilian leaders who seized power in March 1976 instituted a vicious, secretive system of kidnapping, torture, and killing that claimed tens of thousands of lives and damaged countless more. Each March 24, now deemed the Day of Remembrance for Truth and Justice, Argentina honors… read more about Movimiento Judío por los Derechos Humanos »