The Vision of 6th Century Chanukah in Zechariah 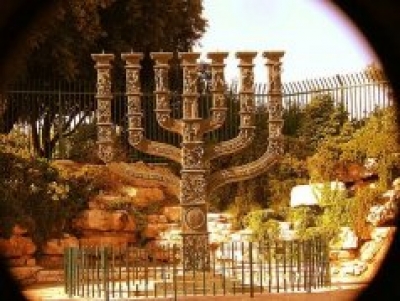 Introduction: Why Write about the Haftarah of Chanukah?
Chanukah has no biblical text; other than in Rabbinic Literature, it is only mentioned in Second Temple Period books like the Books of Maccabees and Josephus.[1] This is one reason I chose to write on the haftarah. The other reason is that I love haftarot and feel that it is unfortunate that the words of the prophets tend to get lost today in favor of exclusive focus on Chumash. After all, was it not the message of human rights and social justice running through them that inspired Buber and Heschel among other to “pray with their feet?” I still recall the challenge my younger daughter had in dealing with leprosy in her bat mitzvah parasha – Metzora – but the tradition in my synagogue was to talk and be questioned from the bima on the parasha.

The Meaning of Chanukah
What is Chanukah about? Normally, when we think of Chanukah, we associate it with the miracle of the Temple menorah burning for eight days without sufficient oil, or the victory of the Maccabees over the Seleucid Greeks. As you might well imagine the celebration of Chanukah in Israel emphasizes this latter theme, and the success of the smaller against the more powerful more populous outsider. Some of us might also jump to the victory over Hellenism—adopting foreign ways was seen as something negative in some quarters in antiquity, so bad that defeating it justified the use of force. You might think any and all of these things, but I will question all of these assumptions in this short devar Torah.[2]

Zechariah as the Haftarah for Chanukah

The rabbis chose Zechariah 2:14-4:7 as the haftarah for Shabbat Chanukah. The setting of the Book of Zechariah is the return from Exile in the Persian period, the last third of the sixth century B.C.E. Dyarchy—where two individuals are the joint heads of state—is the new form of government in the province of Judea. For this post, the Persian government selected Zerubbabel ben Shealtiel, a governor and descendant of King David, and Joshua ben Jehozadak, the high priest, to cooperate and rule the new province together. The Persian king required them to accept only limited sovereignty—they were to remain a province of Persia—in exchange for permission to rebuild the Temple and practice their own religion.[3]

Rededicating the Temple (Zechariah Chapter 3)
On the simplest level, Zechariah chapter 3 was probably chosen because it describes the (re)dedication of the Second Temple, which could be seen as anticipating its rededication centuries later by the Maccabees. Specifically, the chapter describes the investiture of Joshua by God as High Priest of the restored Temple and purifying him for his role in the rededicated Temple. Unlike the more prosaic description of this event in Ezra chapter 3, Zechariah tells the story from the perspective of God and the angels, complete with the famous reference to “the accuser” (ha-satan in Hebrew) attempting to discredit Joshua and an angel of YHWH defending him, removing his dirty clothes and dressing him in priestly robes and a diadem. Joshua’s change of clothing is symbolic of his purification.

The Vision of the Menorah (Zechariah Chapter 4)
But the haftarah doesn’t end with the investiture of Joshua in chapter 3, but continues into chapter 4 as well. Here we have probably the most memorable vision of the Temple Menorah in all Hebrew literature. It is a lampstand of gold with seven lamps on top if it with spouts. As we learn from vv. 11-14, they pour “liquid gold” into the two olive trees that flank the menorah, which the text (v. 14) identifies as “the two sons of oil who stand by the Lord of all the earth.” This means they represent the two leaders, Joshua the high priest and Zerubbabel, the governor and Davidic scion. Zech 6:13 says also that there will be a “peaceful counsel between them.”

Is There More to the Sages’ choice of Haftarah?
In theory, I could end the piece here and say that the Sages simply chose a prophetic passage that dealt with themes relevant to Chanukah as a day when the temple was rededicated. But I don’t think this explanation does this choice justice. As I see it, the sages’ chose this passage from Zechariah wisely, subtly, and with a number of other points in mind.

In addition to describing the investiture of the high priest and the menorah, the chosen passage puts forward a solution to the classic universalist-particularist dilemma. How can YHWH be the God of the Jews and the entire world at the same time? The world persecutes the Jews (in the time of the rabbis and the Maccabees), or at least rules over them in the name of other gods (in the time of Zechariah). How is a Jew supposed to make sense of this?

Zechariah solves this tension by envisioning a future where there will be peaceful cooperation among peoples under God’s universal dominion. Zechariah proclaims the centrality of the Temple in the Judean heartland, symbolized by the Temple Lampstand, but imagines that this centrality will be felt by all human beings, not just Judeans.

The haftarah opens with this optimistic vision of the future. These “many nations” (goyyim) are the very nations and enemies round about who in the end of days will come close to God. Thus, Zechariah resolves the tension between Judah and its enemies/overlords by invoking the concept of one God for all peoples and nations (cf. Zech 8:20-23).

The Messianic Future (3:8-10)
8 Hearken well, O High Priest Joshua, you and your fellow priests sitting before you! For those men are a sign that I am going to bring My servant the Shoot…
10 In that day—declares YHWH of Hosts—you will be inviting each other to the shade of vines and fig trees (NJPS).[5]

This supplementary oracle introduces the royal messiah or Shoot (???), or future Davidide,[6] though not for the present time. Although often imagining the return of the Davidic monarchy brings with it visions of military struggle, the tone of v. 10 is pacific and hopeful: in the future each person will call out to his fellow or companion under his/her vine or fig tree. Moreover, the prophet offers this most hopeful and optimistic statement while under Persian occupation. He resolves the tension between the present and future in a peaceful way: the Davidic messiah is not a warrior but a political figure, the king, who will rule alongside a religious figure, the high priest.

Not by Might (4:6)
This is the word of YHWH to Zerubbabel: Not by might, nor by power, but by my spirit, said YHWH of hosts.[7]

Our Chanukah haftarah ends with this famous line. By ending here, the rabbis are really cutting this speech off in the middle, since verse 7 continues God’s speech, which describes Zerubbabel leveling a mountain to produce an excellent stone (probably a reference to the Temple.) Instead, the rabbis chose to end with a call to Zerubbabel, the heir to the Davidic kingdom, to rule with the spirit of God and not to attempt force. This eloquent call for a reasoned and non-military solution to political realities in a time when Israel was a conquered nation is a message that should not be lost, and it is one that has resonated in many quarters through the centuries.

The Message of the Haftarah

What did the rabbis intend for us to take away from the placement of this haftarah on the Shabbat of Chanukah? First and foremost, we are encouraged to think about Chanukah as more than a festival celebrating a miracle of lights and a military victory over the Seleucid Greeks. It is also a festival that celebrates the victory of the human spirit and the universal desire for peace at most any cost. As we know from other sources, neither the Maccabees nor their Herodian successors rejected Hellenism;[8] rather, we know very well that, like the rabbis after the fall of the Temple in 70 CE, all embraced the contemporary world of Greco-Roman culture, which allowed Jews to prosper and thrive in a multicultural world.

Second, let’s also think like the rabbis about Chanukah, namely that it is a festival that offers a way of peace and reconciliation as articulated by Zechariah the prophet, whose name means “God remembers.” On this Shabbat let us remember the lesson of the Persian period: pragmatic accommodation to a situation not desired can be accepted and made the best of. Even though a majority might have wanted independence from Persia, the practical solution to the situation allowed a relative period of peace to ensue for two centuries.

Moreover, while we are thinking about cooperation, it is nice to see the close relationship envisioned by Zechariah between the political and religious, between the governor and high priest.

Finally, returning to my introduction, let us not—in our rush to focus on Chumash—forget the haftarah and the important and powerful voice of the prophets.

Professor Eric M. Meyers holds the Bernice and Morton Lerner Chair in Jewish Studies at Duke University. His Ph.D. is from Harvard University and his M.A. from Brandeis. Meyers’ specialties include biblical studies and archaeology with a focus on the Second Temple and Greco-Roman period. He has directed or co-directed digs in Israel and Italy for over thirty-five years and has authored hundreds of articles and reviews and reports and more than 15 books.  His most recent publications include Alexander to Constantine: Archaeology of the Land of the Bible, vol. 3 with Mark Chancey in the Anchor Bible Reference Series in 2012 by Yale University Press. In 2013 his co-edited volume with Carol Meyers, The Pottery from Ancient Sepphoris, was published by Eisenbrauns, the first of a multi-volume final report series on that site. He is the past three-term president of the American Schools of Oriental Research. Meyers has appeared in numerous TV documentaries dealing with early Judaism and Christianity as well as biblical studies. He is also a Chazan, and has served as the High Holidays cantor for Beth El in Durham for more than forty years.

[1] For more on this, see Malka Zeiger Simkovich’s TABS essay, “Uncovering the Truth about Chanukah.”

[2] Sufganiot, latkes, dreidels, present giving, and elaborate decorations are even later expressions of this holiday; they are all part of a more recent and multi-cultural setting and date to medieval and modern times.

[8] For more on this, see, Eric M. Meyers, “Exile and Return: From the Babylonian Destruction to the Beginnings of Hellenism,” in Ancient Israel: From Abraham to the Roman Destruction of the Temple 3rd ed. (ed. Hershel Shanks; Washington, DC: BAS Society, 2011), pp. 209-236.