'You can tell the story either way': journalist on Israel-Palestine conflict 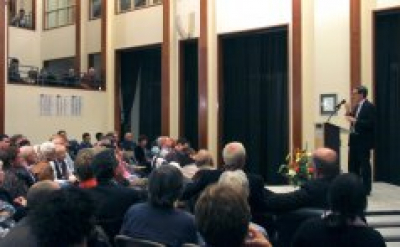 This article originally appeared in The Chronicle at: http://www.dukechronicle.com/articles/2014/11/11/you-can-tell-story-either-way-journalist-israel-palestine-conflict

In light of the increasing tension between Israeli and Palestine this summer, Ethan Bronner, deputy national editor of The New York Times, discussed the crisis and its implications at the Sanford School of Public Policy Monday night.

Bronner’s lecture, titled “The Aftermath of Gaza and the Future of Two States: A Journalist’s Persepective,” was part of the annual Rudnick lecture series hosted by the Rudnick Endowment, the Duke Center for Jewish Studies, DeWitt Wallace Center for Media and Democracy and the Sanford School. The event focused on his personal experiences as well as his opinions on the Israeli-Palestinian conflict and its evolution over time.

“Every foreign correspondent has more than one story to tell, and they often contradict one another, so it’s not so unusual," Bronner said. "But in the case of Jerusalem, it’s incredible what a gap there is between the two sides of the story."

Bronner served as The New York Times’ Jerusalem bureau chief from 2010 to 2012. Following the attacks of Sept. 11, 2001, he worked in the paper’s investigative unit focusing on al-Qaeda. Bronner has also held other roles for the Times, as well as for the Boston Globe, where he served as Middle East correspondent during the 1980s.

In the lecture, Bronner focused on the difficulties of reporting the Israeli-Palestinian conflict, citing the navigation of "competitive narratives" as a major difficulty faced by journalists. He emphasized that pro-Israeli and pro-Palestinian sentiments vary widely from event to event, and take forms in widespread propaganda and government edicts.

Bronner said his goals as a reporter in Jerusalem were geared towards adding dimension to the one-sided opinions he came into contact with.

“I felt that my job over there was somehow to take this increasingly ossified debate, this black and white phenomenon, and try and inject elements of gray into it,” Bronner said.

Bronner spoke about the roots of the conflict this summer, which began with the kidnapping and killing of 3 Israeli boys. He expressed shock at how both sides—Israeli and Palestinian—tell the story differently. Bronner did not express any opinion favoring one side over the other, but instead focused on the many dimensions of opinion as a whole.

“You can tell the story either way,” he said. “There are so many things that happened in this conflict that you can absolutely build a narrative with either one of those convictions.”

Bronner discussed the recent “points of anger” in Israel and the West Bank and whether this will result in a third intifadah—or resistance to oppression.

“One of the things that’s very hard to know is there a way to fix this Rubik's cube,” Bronner said, addressing potential developments in the conflict in the future. “[A potential solution] is not clear at this point.”

“He didn't rely on stats to enforce his points, but instead focused on the human elements he observed as the Jerusalem bureau chief," Griffin said.